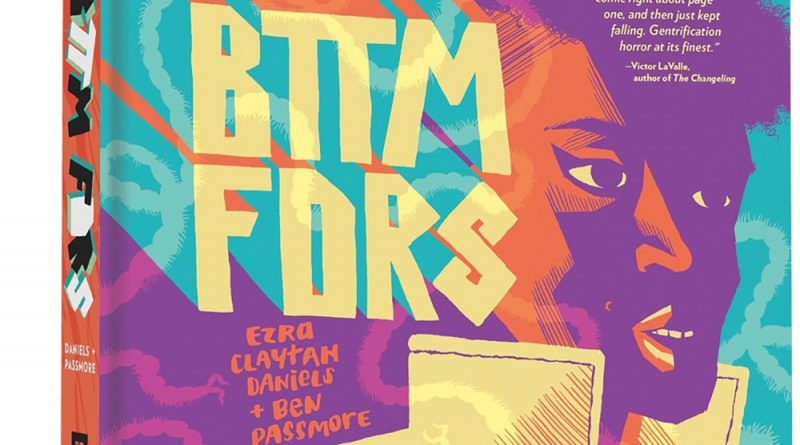 Horror as a genre has a long history of addressing systemic injustice and BTTM FDRS falls firmly in that vein. Published by Fantagraphics, BTTM FDRS is the latest comic from Ezra Clayton Daniels and Ben Passmore, two rising stars in the small press comics world. The book stars Darla, a young and talented clothing designer looking for a label, who moves into the Boneyards, a fictional economically depressed area of Chicago’s south side. The building she moves into is a giant windowless concrete box, and while the rent is cheap, creepy stuff starts popping up during the move in. Meanwhile, Darla’s upper class white friend Cynthia uses Darla’s move to her advantage, trying to gain credibility and prestige on the back of Cynthia’s “authentic” living experience. But that experience goes haywire, and what starts as creepy turns into a dramatic satirical body horror that digs deep into themes of gentrification, exploitation, racism, and white privilege.

Both Clayton Daniels and Passmore use their creative work in pointedly political ways, and BTTM FDRS is no different. Deciding to build a horror comic around gentrification is a clear response to the effect of the “phenomenon” on black lives. We see this response throughout the comic. Darla, an artist originally from the Boneyards, moves back because the rent is cheap. She’s one of the only renters in her building, and she’s an invader from outside the community, which is personally isolating and alienating. Her connection with other black residents is tenuous and at times strained. But it’s her developer landlord Gene who encourages artists to move in, to create an “arts culture” that he can build into a financial gain. In the fullest sense, Gene exploits Darla financially and culturally, and his presence throughout the comic is a stark reminder of the oppressive exploitative financial pressure of gentrification on economically disadvantaged communities across the country.

Another theme of the comic is the way racism works on a spectrum. There’s the more open nastiness, the refusal of 911 to assist Darla in an emergency, and then there’s the oblivious co-opting of Darla’s neighborhood for “street cred” by her white friend Cynthia. When Darla and Cynthia get into an argument about Cynthia being shitty, it leads down a path that is irreversibly bad for everyone involved. Passmore and Clayton Daniels implicate a wide swath of people; the financial complex, the media who prioritize Cynthia over Darla, and on and on.

As a writer, Clayton Daniels has already shown that he can put together a good, twisty suspense comic with his celebrated Upgrade Soul. But, like his other major work, BTTM FDRS takes a little time to get moving. The slow build of BTTM FDRS is like an engine warming up, and some readers may be impatient for the scares. Once the book gets through the first act, the speed and intensity pick up dramatically, making it un-put-down-able.

Every horror story has to have its monster, and in this case, it’s the giant housing complex that Darla lives in. There’s a clear metaphorical linkage between the house and black culture. The monster’s original function was as a fully automated home, and it was created by a black genius. The technology of the home was exploited by white powerbrokers who wanted to use it for their own gain (in prisons, a nod to the carceral state), and turned into something unrecognizable when put into the hands of white people. White characters throughout the comic want to exploit it without being fully integrated into it or a part of it. In a sort of sly nod to cultural power generally, the monster is directable, but it’s also instinctive and not fully controllable. It works in ways you don’t quite understand, and can hurt people quickly and irreversibly. Chucky, a side character whose aunt created the technology and who grew up knowing the internal workings of the house, calls it a “snail without a shell.” It’s clear that who the “shell” is matters a great deal.

Passmore’s art is spectacular throughout, and a highlight of the comic. The book is wider than it is tall, using a 2×2 grid that Passmore modifies to highlight important story beats. There’s not a lot of formal experimentation here, but there doesn’t need to be. His linework is cartoony and dynamic, lending to the humor of the comic. His style is perfect for the kind of biologic yuck factor that turns this book from interesting to inspired. The simplified color scheme uses bright contrasts to amplify the unreality of the work. The opening scene where Darla and Cynthia go into the apartment bathroom only to have the toilet ‘glorp’ at them and spill out a pile of red innards is a fantastic example of the humor of the comic. Cynthia’s posture in this scene puts Darla in front of her like a shield, and Darla’s what-the-fuck facial expression tell you a lot about the tone of the book to come. The character’s faces, the goofiness of the scene, the perfect color choices, it all adds up to something special. It’s funny, it’s creepy, it’s weird, it’s good.

Both Clayton Daniels and Passmore have been on something of a tear recently – Upgrade Soul was a dramatic horror/suspense comic that finally found its collected form in 2018, to much acclaim. Passmore’s own work in Your Black Friend has been nationally recognized. So to see BTTM FDRS come out so closely to those two works is fortunate, because it shows that the two are great collaborators as well as individual creators. BTTM FDRS takes elements of their shared work and combines it into something that’s special. With its biting social commentary and fascinating worldbuilding, plus Passmore’s vibrant illustration and otherworldly colors, BTTM FDRS is the book of the summer. An absolute must read.

Fantagraphics provided a review copy for the purposes of this review. 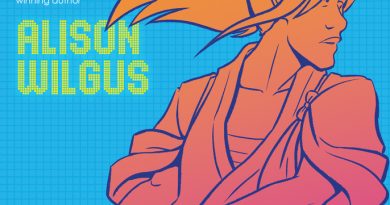