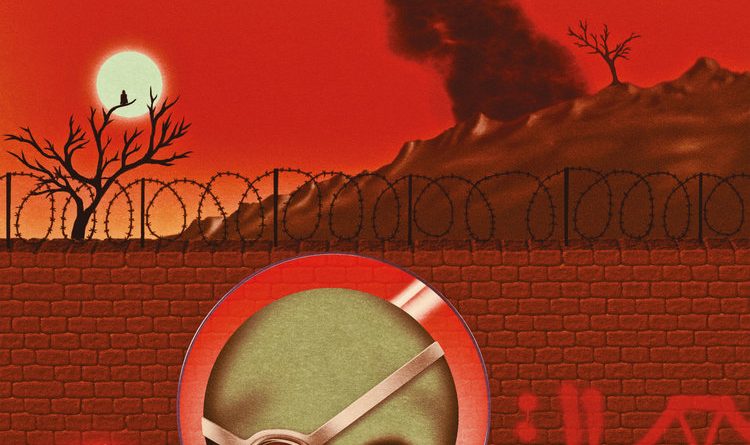 (Update 2/25/18: I have been notified by Tom Oldham that all of the stories told in Berserker are are not fiction, but are entirely true. Please excuse this oversight in the review below. Thanks!)

Breakdown sent a copy of their new sci-fi anthology Berserker in the Fall last year, and I’ve been slowly piecing my way through it. A mix of comics, written fiction, and interviews, the goal of Berserker (as far as I understand it) is to showcase artists working within the science fiction genre or using the trappings of genre to tell more reflective, personal stories. Some of the cartoonists whose work is contained in Berserker are established alt-cartoonists; Anya Davidson, Lane Milburn, and Ben Marra all have books out from Fantagraphics, and Jonathan Chandler and Lando have both been published widely in the UK scene and are Breakdown Press alums. The anthology is a full-color, 68 pages, a hard to classify collection of material that begs more questions than it answers.

Berserker has a selection of short comics that function as its base material, and it opens with probably the strongest comic of the lot, Anya Davidson’s “Night Timers.” Dressed up in science fiction clothes, “Night Timers” is a modern story of economic insecurity and petty crime. I like Davidson’s work and this short selection was a reminder to read her recent Retrofit book. Davidson’s strong sense of color and pacing drive a installment of what is supposed to be a long-running comic. We see this trend throughout the anthology – most of the comics contained within are not one-shots, but the first chapter of longer stories. Serialized fiction is great, and there isn’t a lot of space in the anthology scene for serialized work right now. That said, most of these initial comics leave something to be desired. I’m a fan of Lane Milburn’s work, but there’s no denying that his comic “The Gig” is just setup material. Chandler’s entry “Sword of Sorcery” is probably my least favorite of the first episodes – it seems overworked in comparison to his other recent comics. The jokes and humor in “Sword of Sorcery” have a dead/hollow quality that’s clearly intentional, but Chandler’s work in the past has excelled because it was so pared down to the essentials. As it stands, it feels bloated, and the colors are a distraction.

Ben Marra’s “Drug Destroyers” gets a special mention here, because I think it’s the most distilled version of his machismo, violence as eroticism… thing. We saw this thematic work clearly in Terror Assaulter and Blades and Lazers but here the words of pornographic sex paired directly with acts of violence brings those thematic elements to a stark upper threshold. It was a smart choice letting Leon Sadler color these pages, because the colors add a foulness to the line, a complicating factor that bears examination. But distilled doesn’t mean interesting or better.

Hardeep Pandhal, an artist from the UK scene, has a self-contained piece called “Bang Bros” that felt derivative and exploitative. I took a look online, and the guy clearly has a body of work that hinges first and foremost on being provocative. The lead character is a personified baby pacifier, which felt appropriate for how infantile, how “middle-school swear words scribbled in a wide ruled notebook” it felt. While some of the work in the book left me disinterested, this selection was a turnoff, and nearly made me abandon the book entirely.

The written work was interesting, and I did like Sammy Harkham’s interview with Robert Beatty, but I can’t say any of the fiction was memorable. And the casing of the thing, the editor voice of Low Priestess Kleax Nix Vizz, the DATA BLASTS, etc. all felt superfluous, all acting against the material contained within. Unless of course you are really into Warhammer 40k, then I guess this kind of thing is right up your alley. I was also confused by the use of black ink throughout as panel borders and page color until the very end with Lando’s comic “Odnall’s Pral.” This inconsistency left me scratching my head – if you’re going to do a contextual act like the one Berserker wants to do, then commit fully or don’t commit at all.

Ultimately Berserker feels like it is struggling to define itself, and it’s no surprise that the collected whole feels uneven. Conceptually, I kept thinking, “Why does this need to exist?” and Berserker has a very hard time answering that question. With middling work and slow introductions to longer stories, the cartooning is less than inspiring. The result is an anthology that barely gets off the ground. An unfortunate, inauspicious start.