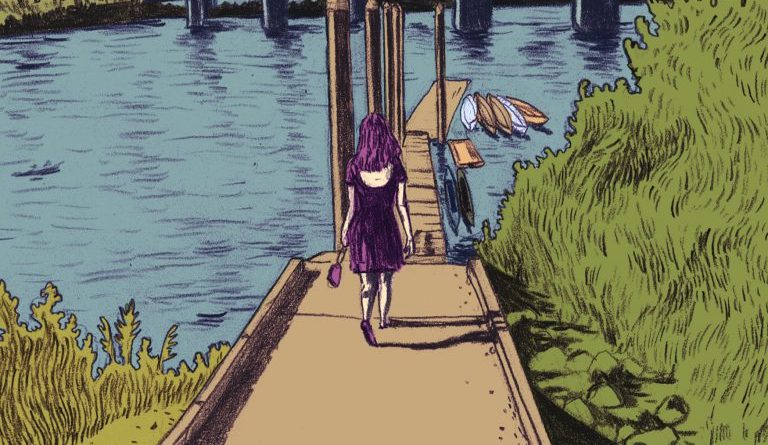 One of the things I like about reading small press comics is the hunt. Despite there being distros across the US and a few good bookstores that have online storefronts, so much of what gets published in the small press community is isolated to a single website. That means if you’re trying to find new and exciting work, you have to know where to look. Such is the case with Before the Rain, a comic written and illustrated by Anne Pomel. Published in a small print run of 200 issues, Floating World Comics in Portland is the publisher and only place you can get a copy (at last as far as I can tell).  Pomel is a French illustrator who moved from Paris to Portland in 2015, and Before the Rain is a cataloguing of the first month of her migration.

When I first saw the illustration of Before the Rain, I was captivated by its loveliness. Pomel has a great eye for detail, and the black and white illustrations have a depth that I don’t often see in memoir comics. I’m a sucker for illustrations made with graphite. But when I finally got a copy of Before the Rain, I was more impressed with how quiet the book is. Being a visitor in a new city can be quite harrowing, and migrating can be exponentially worse. In the quietness of Pomel’s story, we not only see the beauty of the city she has migrated to, but the isolation she feels.

Pomel also focuses on the capture of image and sound throughout the book. She discusses taping her voice when she gets to Portland and when proposes taping herself again when she leaves, to hear the difference. It’s clear that Before the Rain is an exercise in capturing, both the precise visual moments and the memories of those first few weeks she spent in Portland.

I love the way that the comic is paced – Pomel has an eye for experimentation in page design, and most of the pages play with empty space and layout. The result is something of a distancing effect, but also Before the Rain trains your eye to move slower. The zine is a short 40 pages, but it reads much slower than most. Before the Rain as a physical object is also quite lovely. The heavy cream paperstock feels great in your hands, and it’s clear that Pomel and her publisher put some thought into the production. For a small print-run object, it’s touches like this that I appreciate.

As far as the comics hunt goes, Before the Rain is quite the pleasant surprise. Having not seen Pomel’s work before, I’m happy to have Before the Rain as an introduction. It’s clear that both the book and its author have a lot to offer.

Patreon subscribers to Sequential State saw this review early, and I pointed out this book to them via the “Go, See, Buy?” feature that I run there every week.