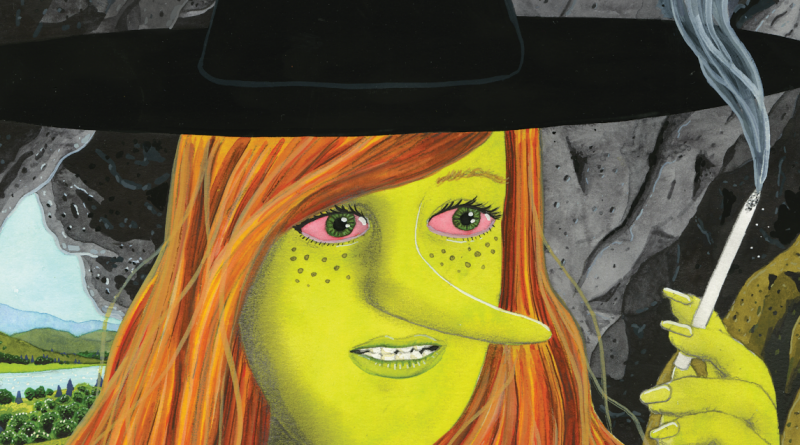 Welcome back, dear reader. On Monday, I ran an interview with Simon Hanselmann that I hope you take the time to read. The initial focus of the interview (although it ended up being fairly far-ranging) was Hanselmann’s latest graphic novel, Bad Gateway. Clocking in at 176 pages, Bad Gateway is Hanselmann’s latest collection of Megg & Mogg comics. Unlike his last two books, Bad Gateway moves past the ending of Megahex, where Owl moves out after being sexually assaulted by Werewolf Jones. Bad Gateway, a reference to gateway drugs, is therefore also another type of gateway – a gateway to the more harrowing, darker material that Hanselmann has been promising for years.

As if to signify that change in focus and tone, Bad Gateway is also physically different from Hanselmann’s previous collections. Bad Gateway is an impressive print object; the book has gold foil on the cover, black gilding, a sticker, and is a much larger book than the first 3 volumes. Instead of reducing the material, Bad Gateway is printed at the size that Hanselmann is working, which is similar to his European album editions. And that size increase is a net benefit, because Hanselmann’s illustration is better than it has ever been, and his paintings, which appear as spreads throughout the book, are breathtaking in their detail and complexity.  Hanselmann’s art continues to improve book over book, and the new size makes that more clear. With a series like Megg and Mogg, sometimes the art seems to all slide together. It’s almost easier to think about like a newspaper comic, constant and unchanging. But going back to the original Megahex, it’s clear how much Hanselmann has grown as an artist.

In terms of plot, there’s a lot going on, generally centered around the aftermath of Owl’s sudden departure from the home. Werewolf Jones moves into his old room, and things start to fall apart around Megg and Mogg. Both characters are in a bad place in their relationship together, and Jones is a chaos agent addicted to hard drugs. Hanselmann vacillates between gross out jokes, bong rips, and deadpan humor on one side, with an upsetting, voyeuristic view of Megg’s depression and the drug haze that surrounds her on the other.

Drawing contrasts between Hanselmann’s previous work and Bad Gateway can be challenging. To a certain extent, the Megg and Mogg comics are like a long-running television dramady. But things are changing. Hanselmann is getting more serious, more honest, more real. There was always a sense in the first three books that things were getting out of hand, but were mostly going to be fine. No longer. Werewolf Jones’ influence on the house leads to some dramatic and heartbreaking moments. Megg sells childhood possessions for drug money. There’s an overdose in the house. We even see a piece of Megg’s teenage years, in a flashback that hints at the things that are coming in future installments of the series.

It’s also clear that Hanselmann’s work on Bad Gateway is a direct reflection on his lived experience. There’s a clear corollary between Megg’s relationship with her mother and his own relationship with his mom. While much of it is played for laughs, there’s a clear sense that Bad Gateway is partially the result of Hanselmann processing his upbringing and his own personal traumas.

In the past, I’ve liked Hanselmann’s Megg and Mogg comics, but with Amsterdam and One More Year, I felt like I had been kept in a holding pattern. I wanted things to change, I wanted the dam to break. Bad Gateway smashes that feeling. And now that I’ve gotten what I asked for, I’m not sure how I feel about it. The change I’ve been waiting for is here, but it’s more stark and more harrowing than I ever expected. It hurts in ways I didn’t think it could. Bad Gateway is Hanselmann hitting a new peak – it’s clearly his best work yet. But it’s a dark place to start a journey, which is going to go to deeper depths. I’ll be here for all of it, until the last page is done. But I won’t lie; I’m dreading it.

If you enjoyed this review and want to support the work of comics criticism internationally, please support my latest venture, Fieldmouse Press. Fieldmouse Press is a 501(c)(3) nonprofit comics press, run by a group of talented, experienced critics. We’re collecting donations to launch our first publishing project, SOLRAD, in January 2020, and we could use your assistance. All donations are tax-deductible. Thanks!