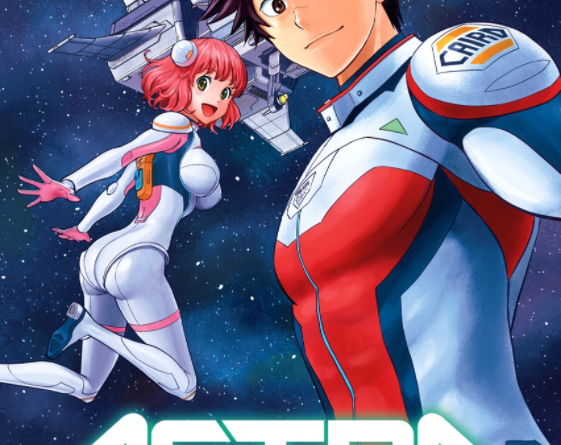 Astra: Lost in Space is one of the books that runs on Viz Media’s website in digital – chapters of the book are up online to read, and are pulled down when the printed edition comes out. At the end of the year, the first volume of Astra: Lost in Space was released in print, and I picked up a copy out of curiosity. Kenta Shinohara is well known as the creator of SKET Dance, a comic that is popular with the scanlation crowd but unlikely to see print in the US because of its strange subject matter and length.

Astra: Lost in Space is a sci-fi genre comic, with an interesting opening concept – that students are using their school break to go camping on a nearby planet called McPa. This group of nine kids is planning on having a fun adventure in a relatively safe and monitored place, but after they touch down on said planet, they are scooped up and spit out in the middle of space. To make matters worse, they’re now thousands of light years from home, with a faulty spaceship and not enough food or water to make the return journey.

If this sounds like an interesting plot to you, I’d have to agree; there’s the potential for a lot of compelling human vs. nature and human vs. human storytelling, and there’s a clear naturalism and survival theme that could drive a strong science fiction narrative. But at the outset it’s clear that Shinohara can’t stay out of the way of himself. All of the problems that can exist in this sort of narrative are there to begin with; the main female protagonist, Aires, is a bumbling ditz who exists to be rescued, and the main male protagonist, Kanata, is a tryhard wannabe captain. These two cliched characters are shaken and stirred with a selection additional cliches, (the child prodigy, the scientist, the quick-thinking brat) and Shinohara even rips the “quiet child with rude sock puppet” schtick from Kurosagi Corpse Delivery Service. These characters are made worse by awful dialogue. It’s clear that whoever translated this had a hell of a time figuring out how to make the Japanese puns and word jokes click in English, and the result is less than impressive. The language is often stilted, and characters spend whole panels, sometimes even half a page going on about a mispronounced word.

So, the characters are cliches, and the dialogue isn’t any good. But that’s not where things end, because even the drama of this space survival comic seems half-baked. Multiple situations crop up where if one thing goes wrong, everyone dies, but miraculously everyone makes it through. If it weren’t enough that each of the main characters is a prodigy of some sort, Shinohara puts these Mary Sues into situations where their special characteristics and knowledge give them the exact edge they need to save the day (even our ditzy damsel in distress has a photographic memory that gets shoehorned in at the exact right moment). Because of this, there’s no sense of rising tension, and it all feels relatively risk-free. All of the scenes generally play out this way. The pacing of the comic likewise suffers because Shinohara’s joke dialogue bogs everything down.

Where Shinohara excels is when there are strange creatures and flora to illustrate. Some of the best parts of the comic are when the team is out scavenging for food, and trying to figure out what is edible or not. The space and planetary vistas are sometimes quite lovely to look at, and the scene where the crew is stranded in planetary orbit worked really well visually.

If I were reading manga just for the overarching plot idea and the illustration, I’d probably be right at home reading Astra: Lost in Space. But with its clunky dialogue, poor pacing, strange scene writing, and absurd and annoying characters, there’s not a lot here to love.

You can read more manga reviews at Sequential State here. And if you liked this review, consider becoming a Patreon subscriber, where you can get updates, zines, and even a monthly comics mailer.

One thought on “Review: Astra: Lost in Space V. 1 by Kenta Shinohara”