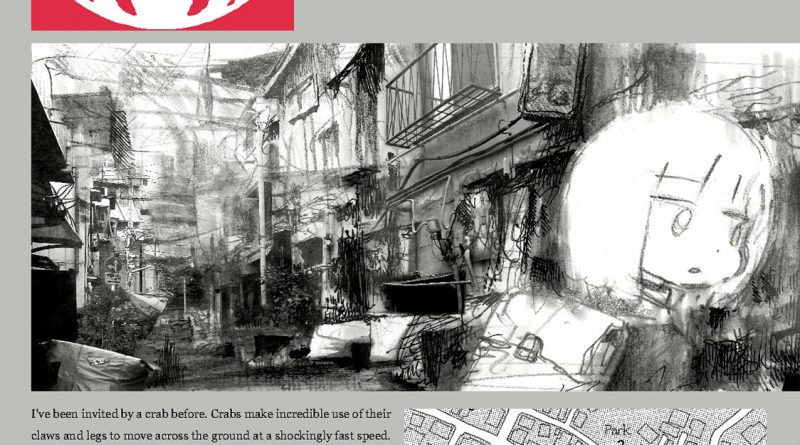 An Invitation from a Crab is a recent release from Denpa, a new manga publisher helmed by Ed Chavez. Chavez is well respected in the English-language manga market and has a reputation as a tastemaker from his time at Vertical Inc, another small manga publisher. Denpa has already made a name for itself through its eclectic initial slate, and An Invitation from a Crab is a clear example of work that bridges the gap between manga and alt-comics publishing.

Panpanya is a cartoonist I had hoped would eventually get an English translation, and An Invitation from a Crab is a great jumping off point. This collection of panpanya’s short stories was originally published in 2014 in Japanese, and it exemplifies the natural tendencies of panpanya’s work. Panpanya’s comics are an excursion into the surreal, and unlike most manga, panpanya’s work completely eschews screentone for a style that is dense with ink, both brushed and scratched onto the page. Looking at individual pages, it is clear that panpanya has a style that is laborious, almost frenzied, compared to other Japanese cartoonists.

Each of the short comics in An Invitation from a Crab exists in a world that’s slightly unreal; the main character, always appearing to be a school-aged girl, chases after a giant snow crab in the streets of an unnamed city in one story, or works at a power plant that makes its energy through coconuts in another. In particularly effective piece, the protagonist loses her body on a train after her soul accidentally gets off at the wrong stop, and she has to go collect it from the train station’s lost and found. Panpanya’s work interfaces with the spiritual and the mythic; there are Japanese yokai monsters and a spirit world that regularly make an appearance in their comics.

The link between the spirit world and the real world also shows up in an unexpected place, and that’s in panpanya’s drawing. The vast majority of panpanya’s drawing is in luxurious, dark ink with one notable exception – the main character. The protagonist is often drawn in pencil. The effect is that the main character seems to float like a spirit around in a moored, murky world. This sketchiness of the main character’s illustration amplifies the surreal nature of panpanya’s comics. Are these comics a dream or a nightmare? Is this world that panpanya creates some kind of afterlife? Panpanya leaves all of these possibilities wide open.

The writing of An Invitation from a Crab is nuanced and quiet, but has a spark of wry humor that I find irresistible. In the first story, after the protagonist chases a crab all over town, she catches it, only to find out that it is the property of a seafood salesperson standing right next to where she catches the crab. That humor is layered in even further in the final panels of the comic, which I won’t spoil, but there’s a strangeness and a gentleness to the work that defies expectation. And while these comics aren’t laugh out loud funny (although some come close), they’re quite charming in their humor.

An Invitation from a Crab is an English-language debut from an author I hope we see more of. Panpanya’s wry, surrealist humor feels like a perfect fit for me as a reader, and their illustration is top notch. Sometimes 2 + 2 does equal 5.