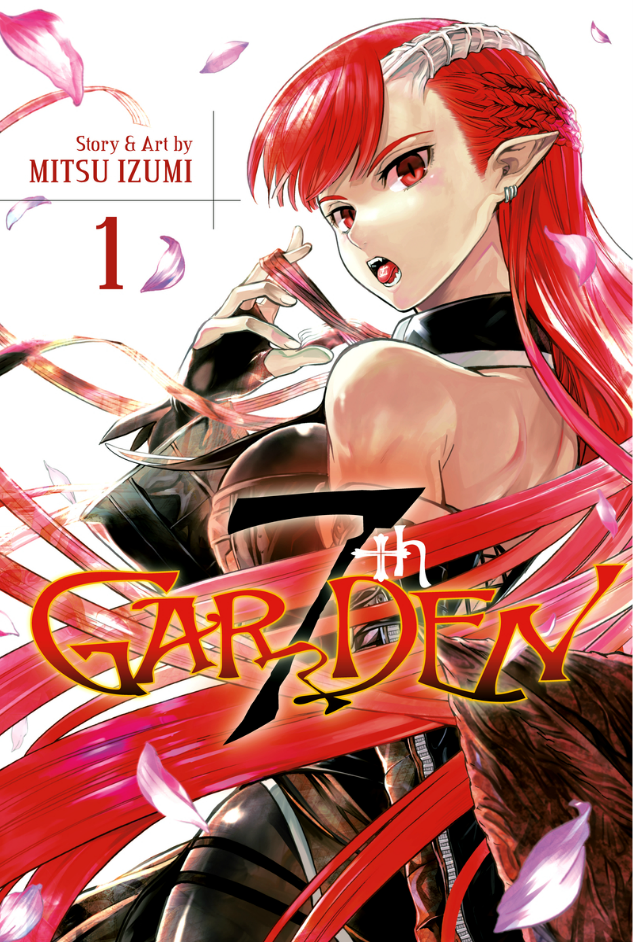 Viz Media continues its hunt for a shonen action title that will replace Naruto & Bleach. It looks like One Punch Man is picking up some slack, but there’s still a hole in the lineup that a few new series are looking to fill – most notably Black Clover and My Hero Academia. Viz released the first volume of 7THGarden in October of 2016, and the third volume was just released last month. 7THGarden is a science fiction/fantasy manga about a young gardener called Awyn, whose sole goal in life is to protect the maiden of the house whom he serves. When he stumbles upon the slumbering demon Vyrde and wakes her, the balance of the world is turned on its head. Vyrde’s goal is clear – kill the six angels that rule the world, and take back her rightful possession of it. At first, Awyn isn’t that interested – but when the local bishop sends crusader forces to purge the small town where Awyn lives, he makes a bargain for power to protect his friends and master.

7THGarden is, at its root, a battle manga. We see Awyn use his new powers on knights and various low level foes, testing his skills. There’s also an element of secrecy as he keeps the origins of his new power a secret from the master of the house, but it’s unclear how that will keep up as the series progresses. It’s also the essential shonen manga, with plenty of demonic (and angelic) fan service. Buxom ladies abound, in compromising positions and in revealing costumes. There are some scenes in this book that made me cringe. I think there’s a discussion to be had on the level and egregiousness of fan service in what are nominally comics for the 8-14 set, and how that fan service plays out for international audiences. I think specifically there comes a point for Western fans where you either like it (and read shonen manga partially for it), hate it (and quit reading shonen manga), or develop a sort of weary blindness to it. I suspect this is the same for corporate comics, although there’s a more defined feedback loop for Western readers to request change in boob windows and the like. It also stands to note that there’s a market for this kind of fan service in shonen fiction, as Seven Seas has so clearly shown. For me, it’s an annoyance. Unfortunately, I’m in the minority, and I doubt the opinion of one Western critic is going to change the structure of an entire Japanese industry.

One of the most interesting features of 7THGarden is its reliance on Judeo-Christian themes and imagery for world building. Images of a pope, the ecumenical structures of the Christian church, even images like the Tree of Life from Jewish Kabbalah. This isn’t a feature unique to 7THGarden – the manga and anime series Evangelion (in all its many formulations) is one of the first prominent comics with Western religious themes to see translation and publication in English, and other works followed. In 7THGarden, the demonic ally with whom Awyn aligns himself is a fallen angel, but the definition of angel is still a little unclear. Angels, using human vassals, can create super weapons with a definite science-fiction bent; Awyn has a weightless black sword that looks like something out of Final Fantasy, and a priest allied with an angel called Leaphar creates a particle ray cannon to do battle and purge sinners.

From the perspective of craft, the characters are well designed and the comic is well illustrated. I did find certain parts of the comic to be hard to read. 7THGarden is full of giant sound effects and screentone, and it eschews clean paneling for dramatic effect too often. It seems like the illustration in shonen manga has to be extremely refined now just to make it onto the pages of Shonen Jump. There’s a house style that Viz seems to favor in its licensing decisions – the net result is that a lot of these new series tend to blend together in terms of style. Small choices in terms of screentone and panel composition are really all that separate 7THGarden from comics like Seraph of the End. This is a great thing if you like that house style, but there’s a visual blurring, maybe a monotony if you don’t.

Overall this is a serviceable first volume, and a much stronger debut volume of shonen battle manga than other recent series debuted from the same publisher. That said, 7THGarden’s level of objectionable fan service, reliance on Judeo-Christian tropes, and muddy panel composition will turn off some readers.