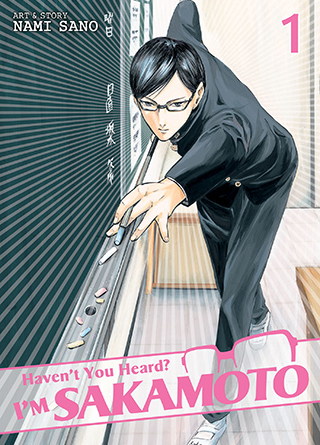 Quick Picks is an occasionally written series of microreviews of books I’ve read over the past two weeks. Here’s a selection of manga I’ve been reading recently. A series that recently ended with its fourth volume, Haven’tYou Heard, I’m Sakamoto is an oddball comedy by Nami Sano, originally  published in Comic Natalie and translated and published in English by Seven Seas. Its corresponding anime has done very well in the US, but my understanding is that this comic hasn’t had the best sale numbers.  Despite that poor reception, Haven’t You Heard, I’m Sakamoto is a delightfully bizarre comic, where the ultra suave, ultra talented, ultra weird Sakamoto goes about daily life impressing girls and defeating bullies by being himself. A range of “secret moves” allow him to perform ordinary tasks in unconventional and extraordinary ways, and the result is always strange, oftentimes gutbustingly funny. Sakamoto, while often doing these remarkably weird things, is always the straight man for every joke, so there’s a weird backwardness to the humor that makes each prank more interesting.

Sano’s art meets the storytelling well, although never really makes the comic transcendent. Still, the reaction faces and other small details in the illustration emphasize the weirdness of the storytelling. Haven’t You Heard, I’m Sakamoto has a very dry and peculiar sense of humor. It’s witty, and it’s quirky, and it’s worth a read. This is Maki Minami’s third series to be published by Viz Media, and while it’s clear that Minami’s talent has made her shojo manga popular for English-speaking audiences, Komomo Confiserie has less punch than her previous work. The main character Komomo is a princess turned pauper, who ends up having to work in the pastry shop of a previous servant. Having previously had all of her needs attended to, and without any sense of the real world, Komomo has to learn how to work and live in the real world. The flip in roles allows Minami to create tension and the humor, but the characters and storytelling are all just a bit… off. Part of me wonders if this series was just an excuse for Minami to draw cookies, cakes, and pastries.

Food often plays a big role in manga, and the Japanese confiserie is an interesting setting for a comic, but I think for this kind of work to succeed it needs to play its cards a little closer to its
chest. The characters are too loud and the situations too forced to allow the main relationship to grow naturally. Minami’s skill at panel composition is apparent, and she and her team of assistants do some very smart things with the screentone and other effects in the comic. I like the frilly dresses and all the set dressing of the comic, but at the end of the day, it’s the relationships that matter the most, and where Komomo Confiserie falls short. Overall, I think this is a series worth a read, and I’m going to read volume five (the final volume), but Komomo Confiserie isn’t a series I’d
revisit. Representing an attempt at a sports manga revitalization in the US, Haikyu!! is one of two major titles out from Shonen Jump this year (along with Kuroko’s Basketball). Written and illustrated by Haruichi Furudate, the series started publication in 2012 and is at a whopping 22 volumes in Japan, but if the first two are any indication, Haikyu!! is perhaps the rare sports manga that can hold onto readers and get people excited about sports comics again. Part of this is due to adaptation that has been very popular in the US – it seems to me that the cross pollination from an anime is a recent indicator of strength in manga sales, and possibly a reason why Viz Media was willing to take a risk on Haikyu!!.

Another reason to take a risk on Haikyu!! is the strength of the comic itself, which is high energy, funny, and emotional in all the standard shonen ways, but better, and by a wide margin. The
exuberant hero Hinata feels like a classic shonen underdog, and that’s a trope that’s seen a lot of success this year, but the entire cast is well-realized, a must for any team-based comic. Each match, and all the sets, spikes, and blocks in that match feel real and lived, and Furudate’s art gives the frenetic energy of the game its due. If you’ve been holding out on Haikyu!!, stop. This is a comic that is redefining shonen manga, and in my mind is a must read for 2016.