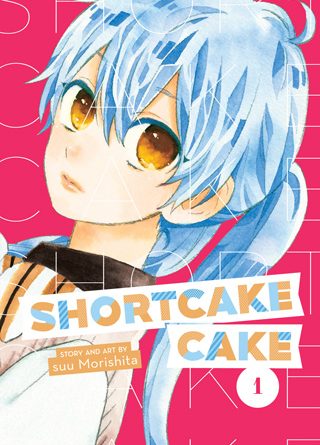 Quick Picks is an occasionally written series of microreviews of books I’ve read over the past two weeks. I’ve been catching up on some manga from a selection of publishers, and it has been a little while since I’ve run a manga review – so let’s dig in!

Shortcake Cake #1 – written and illustrated by suu Morishita; Shortcake Cake is an English-language debut for the artist pair and one of two of Viz Media’s big shojo releases for fall 2018. Ten Serizawa is a high school freshman commuting two hours one way to school every day. She decides to move into a mixed-gender boarding house close to school, but this move has romantic consequences. Ten is a little oblivious to her own feelings, and she clashes with a boy Riku, but later finds out that he likes her.

Morishita has a beautiful style that uses tones and patterning in a smart way, but this shojo comic is the real deal in every sense; a whip smart main character who isn’t afraid to tell off a guy being a tease, great pacing, and a full, vibrant cast of characters. I’m a big fan of all of these things. Shortcake Cake #1 is likely one of the best-executed first volumes of any modern shojo manga I’ve read. If you like romance comics, I think you should check this one out.

How to Treat Magical Beasts: Mine and Master’s Medical Journal #1 – written and illustrated by Kaziya; published by Seven Seas at the end of May, How to Treat Magical Beasts is a comic about a young witch named Ziska who combines magic and modern veterinary medicine to heal mythological creatures. She’s apprenticed with a veterinarian whose work lies mostly in the realm of reality, but each chapter the master/apprentice pair heal a new mythological creature of the day.

How to Treat Magical Beasts hits a sort of niche appeal; it’s a slice of life fantasy medical drama manga, which is a mouthful of a genre. The comic runs in Mag Garden’s Comic Blade, a source for a lot of Seven Sea’s recent fantasy comics. Kaziya’s art is serviceable and cute, but not exceptional. And the same could go for the entire volume; the story is fine, the art is fine, the pacing is fine, but it’s never extraordinary. Importantly, the comic is quite charming, and so it’s a pleasant popcorn read that doesn’t ever offend, but rarely excites. Fans of The Ancient Magus’ Bride will likely appreciate this slower, gentler fantasy comic.

Sacrificial Princess and the King of Beasts #1 – written and illustrated by Yu Tomofuji; another spring release, this time from Yen Press, which is a sort of re-imagining of the Beauty and the Beast tale. In this first volume, a girl named Sariphi is offered as the 99th sacrifice to the King of Beasts. But unlike the other sacrifices that have come before her, she’s not afraid of the King, and his posturing doesn’t seem to affect her at all. Instead of becoming a meal, she becomes his queen.

Tomofuji’s art in this book is quite nice, which pulls this manga along, because the main character is a little too one-note and oblivious to be very compelling. Sariphi only wants to make the King happy to the exclusion of her own desires, and that’s a trope in shojo manga I see sometimes. It’s fine for the main character to be selfless as long as there’s also personal growth, but in Sacrificial Princess and the King of Beasts  it reads like “I’m your property!” The majority of the book is her being told not to stray from her assigned room (just like Beauty and the Beast), and her getting in trouble with courtesans. The resolution of her transition from sacrificial meal to queen of the realm takes all of one chapter, and the drama of the book is a little contrived. I’m certain there are going to be fans of Sacrificial Princess, but I doubt I’ll seek out a second volume.

Comic Review: A Zoo In Winter by Jiro Taniguchi