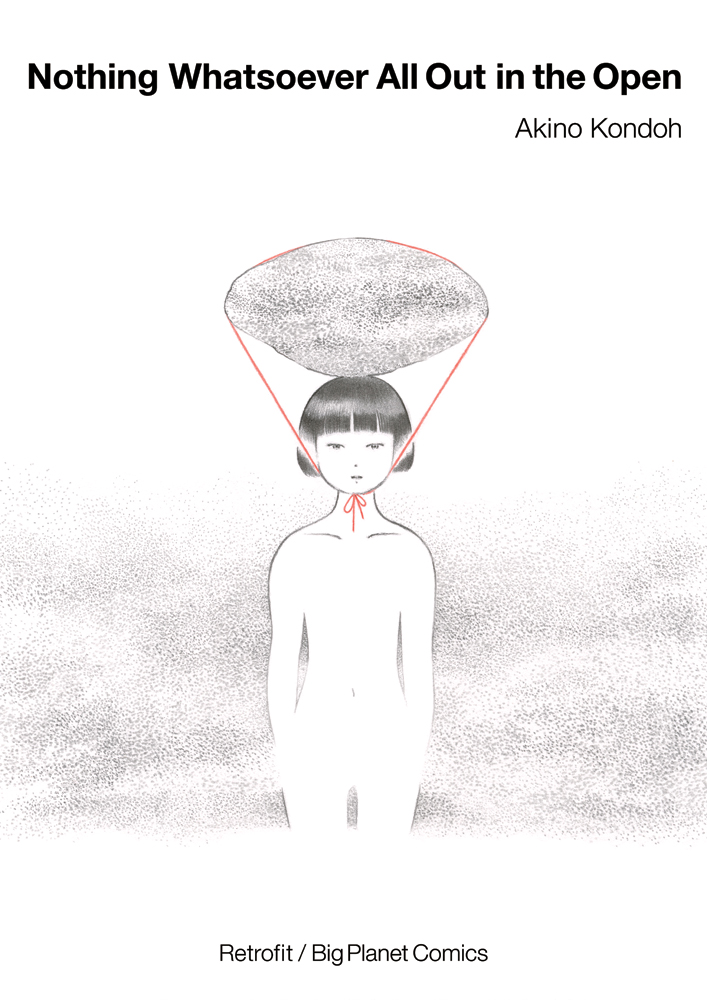 It seems like it has been a whole lifetime ago, but once during the middle of the worst of the economic downturn, Top Shelf Comics put together a 400-page anthology of 10 years worth of alternate comics from the AX magazine. Akino Kondoh contributed two short stories for the anthology as well as its cover. From what I gather, AX: Vol. 1 did not sell as well as expected, and the second volume was scrapped after being pseudo-announced on the Top Shelf website.

Now Kondoh is back with new comics in English, publishing with Retrofit Comics with editing and translation by the more and more vital Ryan Holmberg.

Nothing Whatsoever All Out in the Open is 50 pages of black and white comics with two separate sides – when opened like a regular floppy comic, you can read “Metamorfosa,” and when read like manga, you can read “Nothing Whatsoever All Out in the Open” and “The Kid in the Cabinet.” All three stories were written between 2005 and 2012; “Metamorfosa” seems to have been written specifically to be read left to right.

My memories of Kondoh’s work from the AX anthology seem to hold for this new collection – Kondoh’s illustrations are clean and light, with thin line and minimalist tendencies. This style is likely polarizing – I find it very visually appealing.

Kondoh seems very interested in cyclical storytelling – the longest story by far, “Nothing Whatsoever All Out in the Open” features a mother and daughter as they interact at the end of the mother’s life. I feel as though Kondoh is using this story to explore both perspective and relationships, but at a deeper level, it seems Kondoh is also talking abstractly about the nature of the relationship children have with their parents. As we watch, the daughter and mother complete many of the same tasks, interact with their environments in many of the same ways. Yet the daughter is troubled by, and then abandons a memory her mother shares before she dies. How much personal history is lost when relationships end or when people pass away? How much of our parents do we take along with us in our daily lives? And is that enough, or is it too much?

Kondoh’s other work in the collection is similarly striking. “Metamorfosa” and “The Kid in the Cabinet” are both more surreal, again featuring cyclical action followed by a breaking point in which everything changes. To say much more about them would give away too much, but “Metamorfosa,” of all of the pieces in Nothing Whatsoever All Out in the Open, is the most lush and intricately drawn.

It’s refreshing to see Retrofit take on the challenge of translating and editing foreign comics, and this collection was both a great choice on their part, and a compelling collection for both the manga reader and the alt comics reader. Recommended.

Akino Kondoh is an artist, animator, and comics creator who was born in Chiba, Japan. Kondoh’s work has been published by Enterbrain and Top Shelf. You can read more and see paintings and illustrations at Kondoh’s website.

Retrofit Comics (tumblr: retrofitcomics) is a publisher of alt-comics. Their most recent releases also include the latest work from UK-based Antoine Cossé and a book about the lives and misunderstandings of anthropomorphic fungus from James Kochalka.