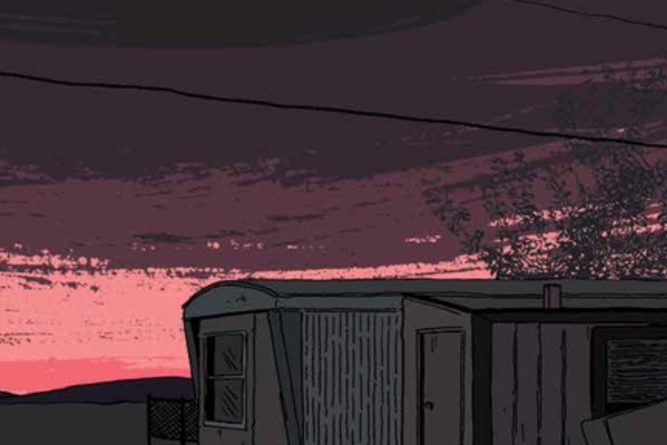 Alternative comics has something of a recent tradition of Midwestern down-and-out stories, strengthened by the work of cartoonists Charles Forsman and Noah Van Sciver. Sean Knickerbocker joins that illustrious group with the appropriately titled Rust Belt, a new short story collection from Secret Acres. Forsman is a point of reference in multiple ways; Knickerbocker’s work has a stylistic similarity to Forsman’s best work, a workman-like cartooning that integrates Charles Schultz and E.C. Segar in equal measure. Rust Belt’s brooding plotlines are amplified by Knickerbocker’s coloring, which utilizes a single accent color which varies from story to story.

Knickerbocker uses people on the fringes to explore the ways in which the world leaves behind the lower middle-class, the adult caregiver of elderly parents, and the working poor. There’s a fair amount of bitterness to this collection, and it seems as though the stories in Rust Belt are drawn from a well of communal experience. Knickerbocker isn’t afraid to let his characters fail, and in fact failure is a thematic element that runs through the entire collection. Whether that failure is interpersonal or professional, the result is often the same.

The most memorable of Rust Belt’s short stories, “Bedlam,” shows Brad, a grocery store assistant manager, losing his grip on life. He’s down on his luck, and he’s stuck in a dead-end job. His pent-up anger ricochets around the comic in unfortunate ways, and in the end he has to make a choice between losing his job or getting paid less to do the same work. There’s an awareness of his failure both professionally and as a caregiver to his ailing mother. That awareness is a wound in the story, and Knickerbocker’s plotting rips out the stitches and applies a healthy dose of salt.

Rust Belt, as a collection, shows readers a part of America that many won’t necessarily want to see. I imagine the collection will be an upsetting read for some, much like Saint Cole was four years ago. The tragedy of Rust Belt is in its familiarity, and the understanding that, as Knickerbocker suggests, a lot of people are one good kick away from falling into the pit. These characters are all right on the edge. Knickerbocker applies the foot, and makes his reader watch them fall.