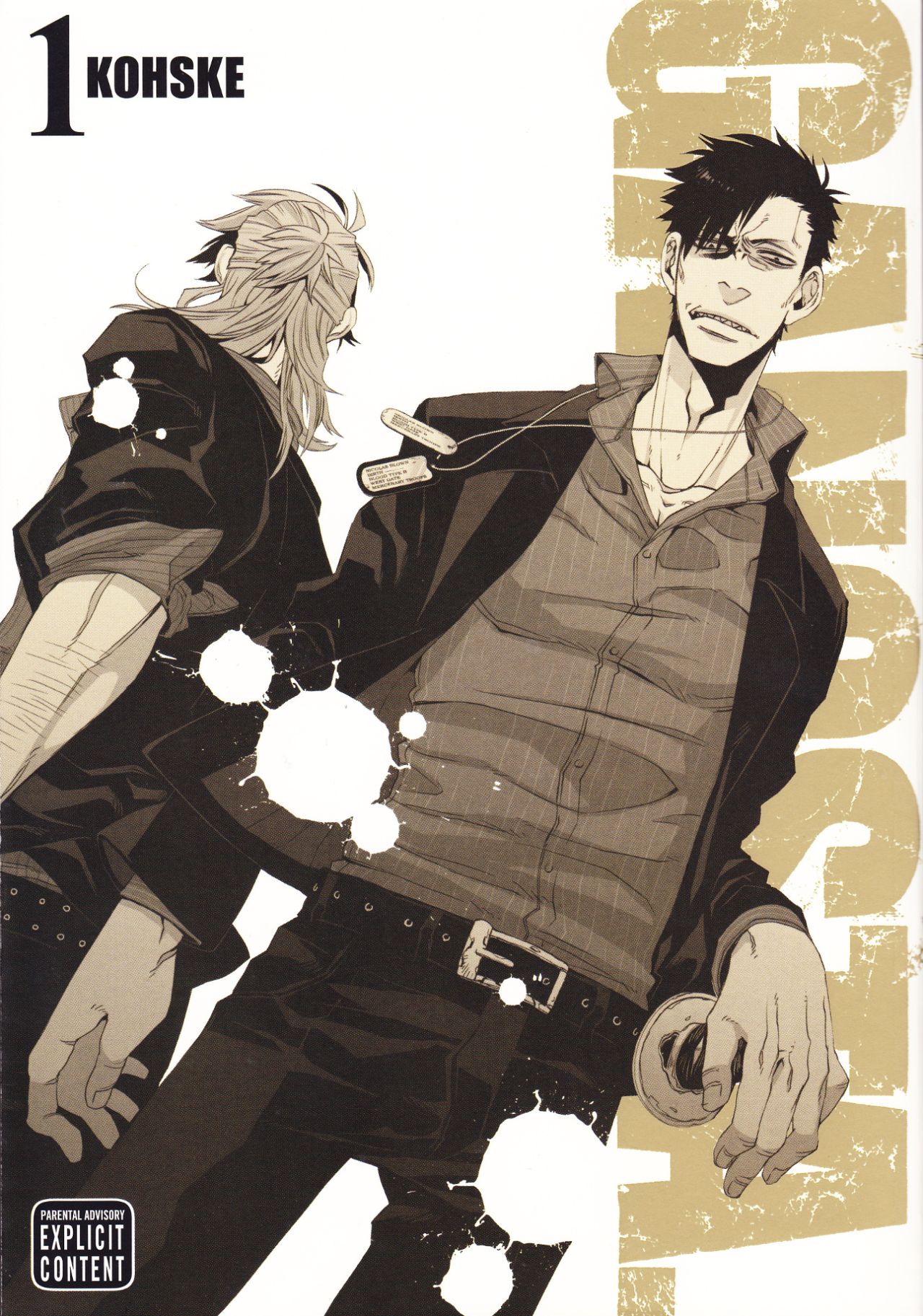 This week I’m featuring another seinen title – this time a little more traditional than A Bride’s Story.

Gangsta. (Japanese: ギャングスタ) is a comic that follows two “handymen,” Worick and Nic, two guys who are willing to do any job for a price. The first volume opens to finds the two of them closing down a new gang  that’s cropped up in Mafia territory – the “client” wants the entire gang wiped out. The two have orders to kill everyone in the gang, but they spare the life of Alex, a woman forced into prostitution by the gang leader. Things get more intense as Nic and Worick take new jobs, and we learn about their dark pasts.

Gangsta. is seinen manga, so it’s written primarily with young men in mind as the demographic. This means there is plenty of guns, sex, and violence. But unlike other seinen comics that glorify the muscle, Gangsta. takes a much different tone. Both of the anti-heroes in Gangsta. have their flaws. Nic is a grouch that makes bad decisions, Worick is a slob and a womanizer. Sometimes these traits are played out for comedic effect, but seeing Nic talk about killing Alex to “finish a job” was pretty sobering.

In some ways, Gangsta. is Alex’s story, which is fairly unusual for seinen manga. Alex is the “normal” person in the context of the story. She helps Nic and Worick with small jobs and mans the phone. Her learning about the two handymen is our window into the world that Kohske is building. She represents the reader in a lot of ways.

Another defining characteristic of Gangsta. is Nic’s deafness. It’s hard to incorporate deaf characters into what is a very visual medium, but Kohske does some really smart things; first, she codes the things said in sign language with black speech bubbles, and second, she incorporates common signs into the panels. When Nic does speak, the text in his word bubbles is often distorted, visually showing the difference between the way he speaks and the way others do. The portrayal of deafness is one that’s very rare in mainstream media, and I’m glad that Kohske has made Nic a real, honest person who just happens to be deaf, and not a “deaf person.” It’s a hard line to walk.

Kohske really knows how to draw legs and abs. Any reader is going to find some cheesecake in Gangsta. whether that is Alex in a halter top or Worick dressing to “go to work.” There is some partial nudity throughout, mostly breasts, so keep that in mind for younger readers.

Gangsta. does a lot of things right – the action is fluid, the dialogue is well scripted, and the characters are really sexy. But more importantly, it is a great portrait of three flawed people living in a violent and often brutal world.

Gangsta. is published by Viz Media and the second volume was released May 20th, 2014.  Of note, Organization Antisocial Geniuses editor in chief Justin Stroman interviewed Leyla Aker, Viz Media’s Vice President of Publishing, about Gangsta. here. It’s a neat interview, check it out.

You can support Sequential State on Patreon by pledging as little as $1 a month. Plus there are rewards at higher support tiers, including getting a monthly curated comics mailer. Check it out!