Sometimes it’s good to kick back, relax, and enjoy a lazy Friday. Or you can blog about the stuff on the internet.

Of note, there is a lot of great stuff to look at on the internet. This is just the stuff I’ve been looking at lately.

In the world of Kickstarter, Strong Female Protagonist is going strong, as is Erika Moen’s Oh Joy Sex Toy collection. I admire both these creators a lot, and I’m happy to see that their Kickstarter campaigns are exceeding expectations. J.T. Yost  of Birdcage Bottom Books is running a more modest Kickstarter campaign for a new book, Cringe: an anthology of embarrassment. My dislike of cringe-inducing moments is currently being overwhelmed by my strong desire to read new Box Brown comics, and at the time of this writing, the Kickstarter could still use a little more help. The project has made its initial funding goal – stretch goals and more to be announced, I assume. On the manga front, Digital Manga Publishing has pushed another Tezuka title onto Kickstarter. This is the only manga publisher who has a steady track record on Kickstarter, and the two volume Captain Ken series looks like it will be funded well before its July 3rd deadline.

I Found It On the Internet!

Zainab from Comics and Cola has a spotlight of PEOW! Studio’s new slate. You can read my review of Hanna K’s New Frontier #1: Third Wheel here.

Fantagraphics posted a preview of Simon Hanselmann’s Megahex and it looks really good – currently slated to ship in August. You can also check out Simon’s tumblr at girlmountain.

Fanta also posted a preview of Lucy Knisley’s An Age of License: A Travelogue, so check that out. Relish was one of my favorite comics from 2013. Lucy tumbls at lucyknisley.

If you missed it, C. Spike Trotman is posting her Kickstarted book about living well and being financially sound on a low income on tumblr. The book is Poorcraft, and it updates every day! The tumblr is poorcraftcomic. You can also buy the complete book from her store, Comixology, and Amazon. A bit older, but Sam Alden posted the first part of his new mini, Hollow, online for you to read. I’ve probably read it 4 times at this point, and it’s wonderful. Sam’s tumblr is gingerlandcomics.

Noelle Stevenson’s (tumblr: gingerhaze) webcomic, Nimona, is heading towards its conclusion. There’s a lot to read if you haven’t dug in already, so check it out. I’m floored by this comic on a weekly basis, and I’m really looking forward to when it is collected as a print edition.

Emily Carroll has a new comic up. It’s a really wonderful meditation on the spiritual aspects of the ghost story. And it will creep you out. Here’s the link.

Michael DeForge recently killed his tumblr account, but has a new comic up at Believed Behavior. For a fee, you can read his and other comics.

If you are still looking for updates to Sticks Angelica, Folk Hero, Michael will continue to update his WordPress platform. He’s also cancelled A Werewolf, Mid-Transformation.

Of biggest concern to manga readers, Viz and Comixology have finally made a deal that will put 500 volumes of Viz’s digital backlist onto the popular comics reading platform. At first glance, the initial Comixology drop does not include a majority of Viz’s shojo content. The most popular work, Naruto, Bleach, and Deathnote are all available. Don’t expect to get Boys Over Flowers any time soon.

Lumberjanes is officially a big freaking deal, having sold out of multiple printruns thusfar.One of Boom! Box’s first offerings, the book was slated for 8 issues. It’s now been upgraded to an ongoing series. From what I understand, Midas Flesh is also doing well for the company. Boom! Box has also announced an 8-issue series by Jake Lawrence, tumblr hero best known for his Fantasy Pals and other great illustration. The book is going to be called Teen Dog. If you are interested in checking out his comics, you can buy a copy of Starpuncher versus the Existential Dreadnought on his Gumroad account.

Have a great weekend! 🙂 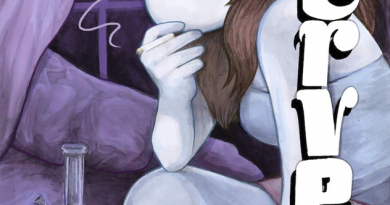