Last week was part 1 of this 4 part list; if you haven’t already had a look at it, there are some comics that I recommend.

One week closer to the end of the year, five more comics on the list. A lot of the December “Best Of” lists are already out, and like them, this list is a very subjective and personal thing. But instead of “best,” I’m going with challenging – what made me work, what made me feel, what made me rethink myself. The comics on this list are allowed to be work published at any time, but I had to read it this year. Most have been published in 2014.

I was really happy to see folks react so positively to the first set – I hope you’ll stick with me for the next few. I bought my copy of Yanow’s Ignatz-nominated War of Streets and Houses in person at TCAF 2014, and I wasn’t sure what to expect. The book is compact and Yanow’s cartooning is spare and minimal, but it expresses a complicated modern life with an examination of privilege, political action, and the counter-revolutionary.

But what drew me most to this book was Yanow’s exploration of space – whether that is the public vs. private, urban vs. rural, the architecture and city design that influences the way we think without being aware, or even space in a protest. In light of current civilian protest in the wake of the tragedies in Ferguson and here in Cleveland, Yanow’s work is both remarkable and essential. Sakugawa has been featured recently in various comics press for her recently published Your Illustrated Guide To Becoming One With The Universe, but it was Never Forgets, a story about change, love, memory, and brokenness that found its way onto my reading pile this Fall. I reviewed the comic here, but I think what pulls me back to Never Forgets is its tender sadness and its critique of a social media culture that values likes over lives. The weekly trip to Vice dot com to read the latest MMO strip has become something of a ritual in the later part of this year. I was immediately drawn to Hanselmann’s comics when I picked up a copy of Life Zone from John Porcellino’s zine distro, and I’m happy to have Megahex in my collection.

Megahex has a sense of rightness about it, as though Hanselmann’s stories fit exactly where they should inside your brain, as if that space was premade and waiting. I see myself, friends, and strangers in Hanselmann’s characters.  Amongst the stoner comedy is a surreal paranoia and a social anxiety that buzzes to the surface only to slip away again with excessive drug use and green haze.  The two page “Megg’s Depression” is a highlight in a remarkable collection. Stechschulte’s The Amateurs was one of the first comics I reviewed when I started Sequential State, and it’s a comic worth reflecting on.  In Stechschulte’s use of lost memory and body horror, The Amateurs challenged me to find meaning in its unravelling – if one can be found at all.

I’ve read a lot of books in 2014, but I keep thinking back to The Amateurs’ moody horror, its atmospheric “wrongness” and the idea that humans will go to extraordinary lengths to ignore the wretchedness of the world around them. This is a book that lingers. I got a copy of the first RAV collection as soon as I could preorder it, but it took me a solid 3 months to finally sit down and read it, which was a huge mistake. Zacchilli’s work is energetic, frantic, and hilarious; it has an intensity that few other comics possess.

Processing RAV is another thing entirely. As Zacchilli dials up the intensity in the middle of the book and darkness takes a grip on page after page, I had to constantly retrain my eye to capture the tiny details in the story. The rawness of RAV is only overwhelmed by the joy of it. I’m waiting anxiously for the next collection.

Five a week until we’re done. See you around. 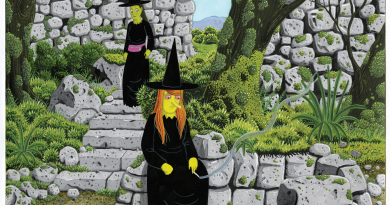 Interview: Simon Hanselmann – “My greatest wish is that I could freeze time.”

Darkening Sameness: Thoughts on Megg & Mogg In Amsterdam and Other Stories by Simon Hanselmann