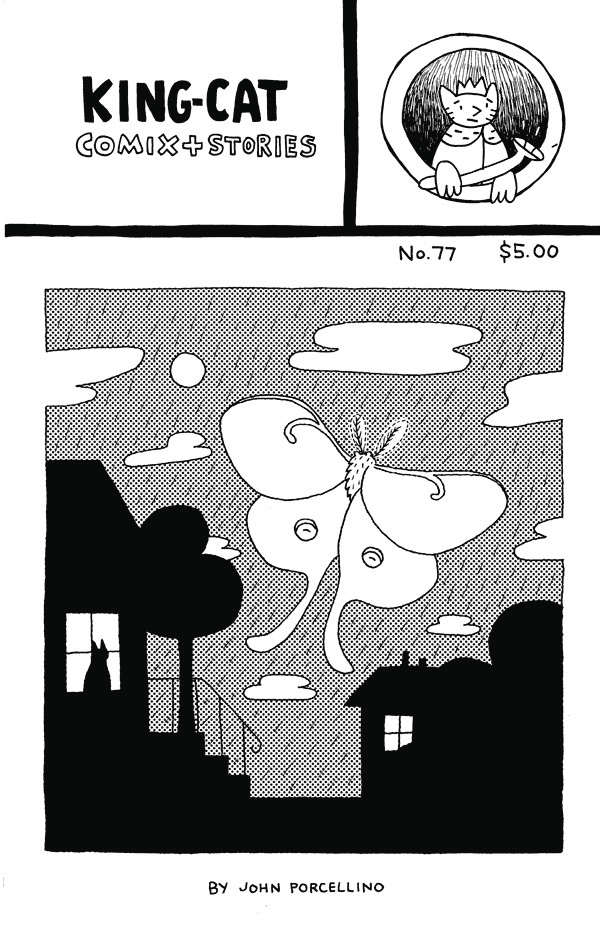 John Porcellino’s King Cat is an indie comics institution at this point, and John recently sent me a copy of his latest zine to look over. The long-running zine series has been collected in multiple books by Drawn and Quarterly, with another due out this Fall. King Cat issues have continued to come out at their regular pace, with issue #77 out this Spring. Like any long-running series, there are ebbs and flows to the way the work is created and paced. The past few issues of King Cat have been fairly intense (issue #75, about Porcellino’s cat Maisy, was a spectacular emotional rollercoaster) and King Cat #77 dials things back considerably. In fact, King Cat #77 is just as much a comics zine as it is a letters, illustration, and poetry zine.

The entire zine is loosely themed around animals. We get stories of Porcellino’s childhood pet frogs, the escapades of his dogs, his encounters with mountain lions, and other sundry creatures. The comics are drawn in Porcellino’s traditional spare style, with distilled linework and language. Porcellino’s line feels meditated upon – there’s very little in the way of shading or hatching that would make the comics look more complex. What I find impressive about Porcellino’s art is how expressive it is, and how little there is to hide behind. If a line in King Cat is bad, it’s immediately obvious. Thankfully, there are few bad lines in King Cat #77.

The storytelling of King Cat #77 is understated and earnest. Any pet owner will recognize a part of themselves in the lists of names that Porcellino meticulously details in an early page. My own pets have accumulated names like badges of honor, and it was a delight to see that from another person. A list like this is a small thing, but intimate and revealing. I especially loved the way Porcellino manages the beats of his stories. I found that especially true of one short story “The Frogs.” As a childhood Porcellino races to his grandmother’s house to save his pet frogs from a torrential downpour, Porcellino dryly ends the story by saying, “That was the same summer I figured out what sex was.” This simple ending puts a very childlike story into a larger narrative about growing up and getting older; it feels small, but it’s not that small. His illustrated poem, “Fluttering Moth,” was also a highlight.

This type of storytelling is not going to appeal to every reader, and readers new to Porcellino’s work (which has recently started distribution through Diamond) might find issue #77 a bit puzzling. I don’t read letters columns, and King Cat #77 had a few pages dedicated to reader letters. But I love the way this series of comics, poems, and lists portrays Porcellino’s wonder at the animal kingdom and his human connection to the animals he has brought into his family. King Cat #77 constructs a portrait of the artist vis a vis his relationships with animals. It’s a remarkable entry in the series.

Thanks for stopping by. If you’d like to see more writing about John’s comics, I reviewed his comic The Hospital Suite back in 2015. If you like the writing you see on Sequential State, please support us on Patreon.